Breastfeeding and Going Back to Work

I was scheduled to go back to work when Gabriel was 13 weeks. I was grateful for the three months I had with him after he was born, but I was dreading… DREADING, going back to work. Instead of being excited that he was growing and getting bigger each week, I got more and more sad as he got closer to 13 weeks. I had never been separated from my baby.

That became my mantra and what got me through. 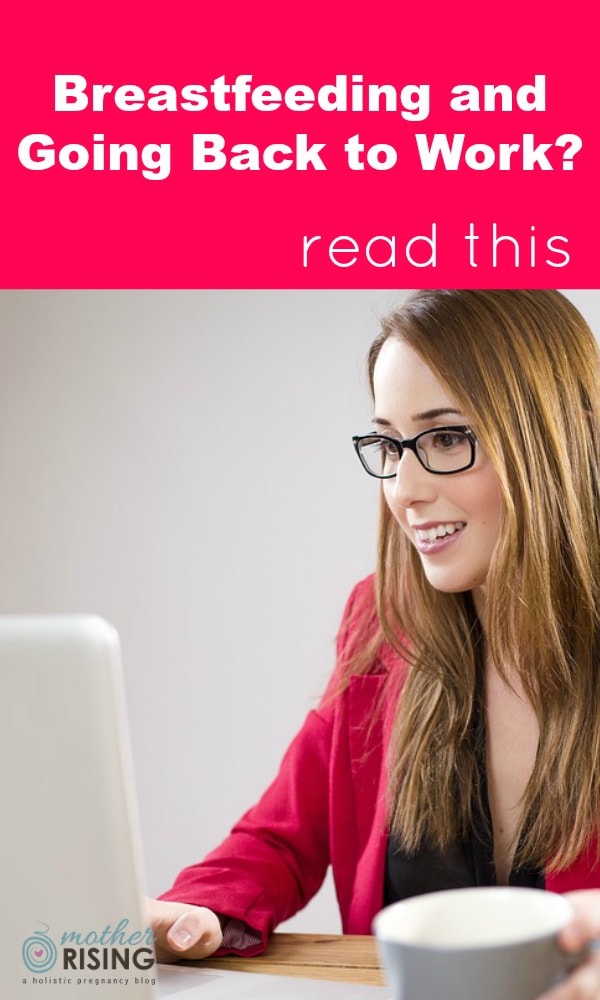 When to Introduce the Bottle

Because I knew I was going back to work and that Gabriel would need to be comfortable switching from breast to bottle, I introduced a bottle to him when he was quite young – four weeks to be exact.

I didn’t introduce a bottle earlier because I wanted our breastfeeding relationship to be going well before I stuck an artificial nipple in his mouth. I didn’t want him to get nipple confusion and prefer a faster flowing, MUCH larger nipple. By four weeks, I was confident that he and I knew what we were doing.

On the other hand, I didn’t want to wait too long because I had heard that if you wait too long your baby will be very accustomed to getting food one particular way and will refuse a bottle. I thought four weeks sounded like a happy medium.

Needless to say, my husband, Matt, gave Gabriel a bottle of pumped breast milk and he barely batted an eye. I made sure that I was out of the room and not part of the bottle feeding process because I didn’t want him to smell me and refuse the bottle because he knew where the good stuff was.

Also, I made sure that the bottles I used were specifically for breastfed babies – sloooooow flow. Not that I personally had a slow flow, but I didn’t want him to prefer a bottle over me.

When to Buy a Breastpump

I used Medela’s bottles that came with my breastpump and didn’t have a problem with them. I used a Medela Pump In Style (double electric pump) which I bought since I was going back to work.

I would not suggest buying a pump like this during your pregnancy if you’re not planning on going back to work. You may find you need one and can buy it later, but better wait to see if it is actually something you’ll need since they are about $200 – $300.

Returning a breast pump (if you’ve opened the box) is not an option.

When to Start a Freezer Stash

Once Gabriel and I were all set with bottle feeding, I started building up a small freezer stash of breast milk so that I would have something to leave at his daycare when I first dropped him off. This wasn’t too hard to do since I had slight over-supply issues.

By the time I went back to work I had enough frozen milk for two days. I used the Lansinoh breastmilk bags.

The first day I dropped Gabriel off, I didn’t go to work. I decided to drop him off in the morning for three to four hours, do a little shopping and see how things went.

It was awful dropping him off, and another mother was dropping off her little baby for the first time as well. We both cried.

I had a blast shopping. I went to World Market and the grocery store. It was nice to not have to lug a carseat around but could zip in and out! Zipping doesn’t happen when you’re a mom with kids in tow.

My biggest challenge going back to work was figuring out when the heck I was going to pump. I also had to figure out how much I was supposed to be pumping. Breastfed babies don’t drink measured ounces… they eat what they want, alotta boobful or a little boobful.

It was important to keep up my milk supply so I thought that maybe I should be pumping as often as Gabriel was eating – which was about every two hours.

First Day Back to Work

My plan of action for Day #1 was to nurse Gabriel before I left the house, drop him off at daycare…

How Much Pumped Breastmilk is Needed?

After each pumping session I put the milk in bottles or the lansinoh storage bags, and kept it all in a little cooler in the fridge. Thankfully my office was right next to the kitchen. (And thankfully my office had a door with a lock.)

At the end of the day I took all the pumped milk to daycare when I went to pick him up. I looked at his sheet that told me how many ounces he drank that day and I found out that I wasn’t pumping as much milk as he needed.

What was I going to do if I couldn’t keep up my supply? I knew I needed to be drinking enough water and I could take supplements like Fenugreek to boost my supply if it came to it.

My Body Adjusted to the Pump

The next day, I did a repeat – nursed him at home, dropped him off, went to work and pumped throughout the day.

I pumped A LOT more milk than the previous day! And it turned out that I pumped just what he needed. Maybe even a little more! (Which worked out well since it turned out that the daycare workers dumped out the extra milk leftover in each bottle. The horror!)

Gabriel would drink anywhere from 2-4 ounces at a time and would usually eat little meals frequently throughout the day (he still does this – nothing has changed). So, it seemed like my body needed to get used to pumping and being away from Gabriel. I was lucky that my supply didn’t dip, but kept up with Gabriel’s demands.

Since Gabriel was at home with me on the weekends, on Fridays I would freeze the milk in freezer bags for the following Monday. Every other day during the week he would drink fresh breast milk pumped from the previous day (except for Mondays which they would thaw out the oldest milk and give that to him).

When the daycare workers thawed out Gabriel’s food, they would thaw out the milk by sticking a frozen bag of breast milk in a mug of water. Microwaves and breast milk don’t mix!

Ok maybe this wasn’t the worst part, but to add insult to injury every night after work, dinner and putting Gabriel to bed I would wash and sanitize bottles. UGH. Other than being separated from Gabriel, this was my least favorite activity I had to do because I went back to work.

It HAD to be done, however, because I didn’t have many extra bottles to spare. I eventually bought some extra bottles so that I could slack on the bottle washing for a day if I needed to.

I pumped for three months (until Gabriel was six months old), then quit my job and decided to be a stay-at-home mom. I am so happy I made that decision. While my life at home isn’t quite what I fantasized it to be, I wouldn’t change one bit of it.

It always seemed a bit unnatural for someone else to be taking care of my child, and me not knowing exactly what they were doing at a particular moment. Even though I am where I want to be today, I am grateful for the experience those three months gave me.

Breastfeeding and going back to work was no joke! I now know how to use a breast pump, store breast milk, can give advice to other mothers going back to work, and I never take for granted the days I am at home with Gabriel.

Just for fun here are some of his baby pictures. 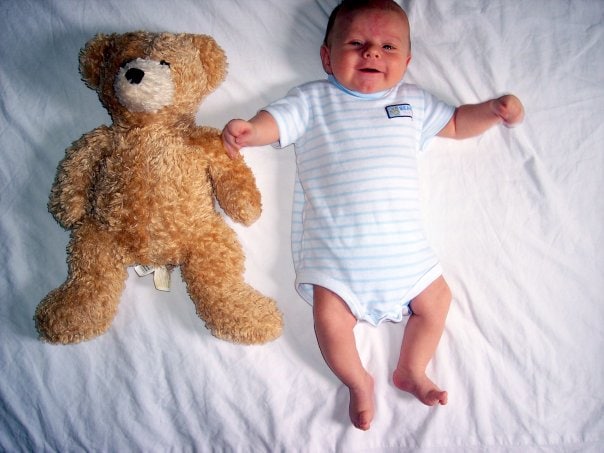 This is Gabriel at 6 weeks. 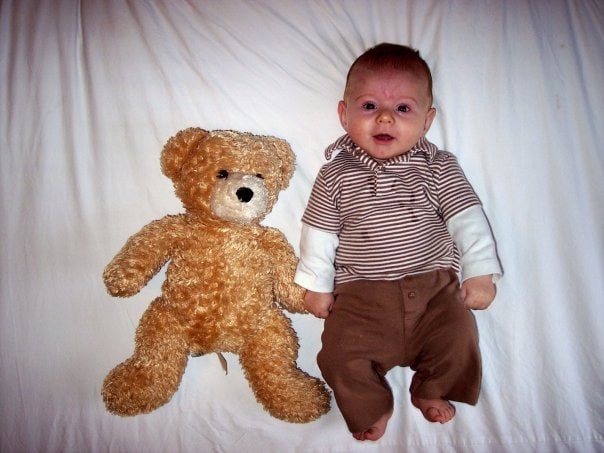 This is Gabriel at 13 weeks when I went back to work. 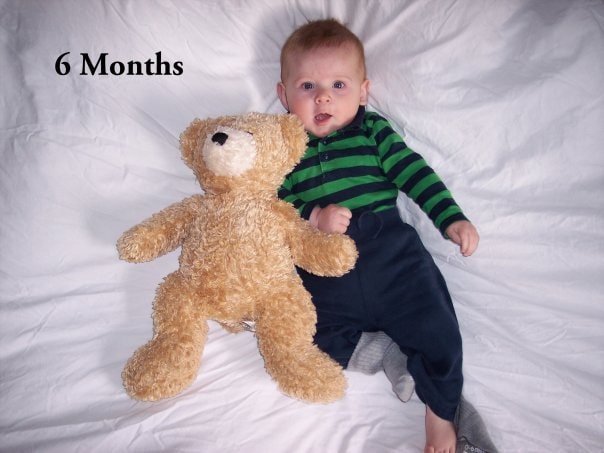 This is Gabriel at six months when I quit my job.

If you are a visual learner, Cindy & Jana’s Simply Breastfeeding online course is PERFECT for new parents! I’ve personally taken this course and LOVE it!

Why learn about breastfeeding?

Breastfeeding is natural but it takes time to learn. New mothers say:

“I never imagined breastfeeding would be so hard and so time consuming.”

“They don’t really prepare you for how overwhelming breastfeeding can be.”

Parents who wait until their baby is born to learn about breastfeeding feel overwhelmed.  The learning curve is steep, especially when also dealing with exhaustion from the birth and overrun with company.

I’ve seen plenty of tears and heard families’ frustrations over not knowing how often to feed, whether their baby was getting enough milk, or how to avoid breastfeeding pain.

It doesn’t have to be this way!

You can feel confident breastfeeding your new baby. Spend time snuggling instead of frantically googling. Cindy and Jana have helped thousands of new families and can help you as well.

Simply Breastfeeding is an indispensable resource which takes you step by step through the things you will need to know about breastfeeding. Your subscription never expires; you can refer back when you have questions and learn at home at your own pace. Pause, rewind and replay as often as you like.

As Registered Nurses and Lactation Consultants with over 20 years experience, Cindy and Jana’s goal is to help you discover the real expert for your baby — YOU! ——>>>> CHECK IT OUT!

Your Story: Breastfeeding and Going Back to Work

Tell me your story!

What was breastfeeding and going back to work like for you? What were you good at? What were your challenges and how did you get through?

I went back to work with my last two at 13wks also. I had a Medela pump'n style as well. Unlike you, I waited until the week I went back to work to offer a bottle. I know! It was crazy, but I just didn't want to and kept putting it off. They all took to bottle with no problem. Thankfully, I work weekend nights and was only away from my babies three nights a week. I work 12h shifts and tried really hard to pump every 3hrs at the beginning. It worked out well for the most part. Sometimes a special mom deserved my attention more ;). Milk supply never dropped and actually always ended up with more than I needed (or she needed). I HATED pumping, washing bottles, and preparing bottles. Just the thought...