Our potty training story begins when I was pregnant with Mr. G.

I read stories on the internet about infant potty training or as some people call it, elimination communication. Post birth, I quickly realized that this method was not for me.

To me, this was something that was not a priority and I found it to be a waste of energy on my part. However, I must add that Mr. G peed and pooped on the potty sometimes when I made it available to him.

Low stress potty training became my mantra. I wasn’t going to do it if it weren’t easy for both of us. I was never going to make Mr. G miserable or put pressure on him if he wasn’t into it. I was definitely not going to make this a power struggle.

And I wanted to clean up the least amount of messes. I like less mess.

I attempted potty training in the fall of 2011 and we had a bunch of accidents so I quickly switched back to diapers. Winter came, it got cold and so we all had to wear more clothes than the usual tank top and shorts (we live in Florida) to keep warm.

I decided to put off potty training until it got warm and Mr. G could comfortably be naked in our house. I had a feeling that he could absolutely be potty trained IF he wanted to be and IF he could be naked most of the time.

Once it got hot, Mr. G started roaming our home naked, and we busted out our little green froggie potty. I also gave him the option of using “mommy’s potty” or using his big potty with a potty seat on it.

After awhile, he got pretty good at peeing only in the potty especially when I was consistent with reminding him. If he was engrossed in some activity like playing with his friends he would NEVER remember to pee in the potty.

Sometimes he would get so good at pottying at home that I would take him to do errands with me sans diaper, but instead in his big boy underwear… but we would ALWAYS have accidents.

Right after he pooped in his pants at Joanne Fabrics I decided to use diapers again. I was stressed and it was a mess!

One day, it just clicked in my mind about what I need to do to potty train Mr. G. It was a duh and an aha moment all in one.

I realized that when he wore his underpants (or pullups or training pants for that matter) that the closeness he felt was so similar to the feeling of a diaper on his body. My son was diaper trained and I had to undo all of that training in order to potty train him. 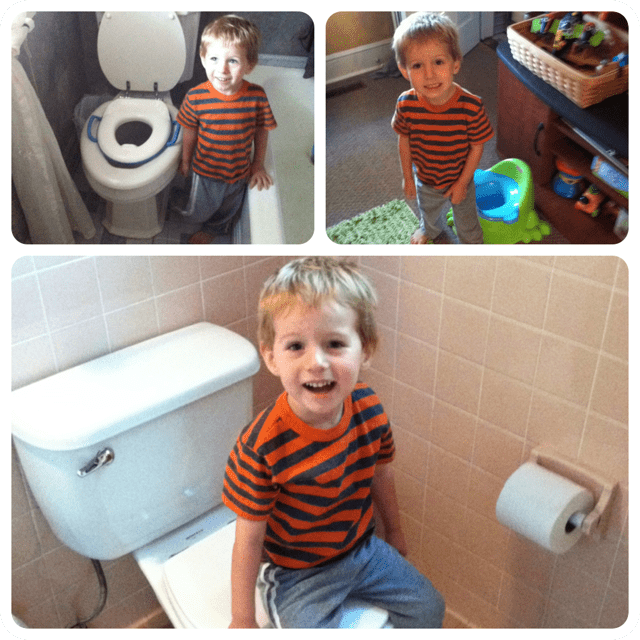 The Key to Our Potty Training Story

What I decided to let him do was go commando at home and also when we went out of the house. And you know what? Not wearing underwear worked!

He had no accidents, would pee/poop when I reminded him to and would *shock* tell me he had to go potty.

I will never forget the day we were in Michael’s and he told me he had to poop, we quickly ran to the toilet and he POOPED IN THE POTTY. AT MICHAELS! Breakthrough!

Once we mastered day time, and day time errands, I decided to try naps. I put him to bed naked, expecting him to pee in his sheets (hey, they needed to be cleaned anyways), but he didn’t! I was floored.

I felt bad because I didn’t give him enough credit. He was completely capable!

Once he easily mastered naps, my husband talked me into going diaper free at night. We peed on the potty before bed, and just like naps I put his frog potty by his bed and told him he could wake up and pee if he needed to (he never did) and sent him to bed naked.

He did so well! I nervously ran to his room in the morning expecting to find a wet bed but found no such thing. I was so proud!

Since then it’s been a bit of a struggle to get him to pee when he wakes up, but we’re slowly falling into a potty routine. Other than morning and post-nap grumpiness, he has done great. He did wet the bed one night when he had a fever and went to bed early without peeing first. Hey, I’ll take that!

Another thing that helped was to give him many options… while still getting him to do what I wanted. If I wanted him to go potty, I would ask him if he wanted to go in his green potty or on mommy’s potty. That usually made him feel like he was in the decision making process and not fight me on the issue. 2 and 3 year olds want to be in control!

I should add that Mr. G just turned three in June. My mother has always said to me that boys don’t potty train until they’re three. In my case she was right!

What’s your story? Have you potty trained yet, still working on it or putting it off like I did?

What Worked For You?

ps – I typed this out last night and this morning we awoke to a wet bed. I KNEW if I wrote about our potty training story he would have an accident! 😉  It’s all good. His sheets needed to be washed anyways.