My mom had gestational diabetes (diabetes caused by pregnancy) while she was pregnant with me so I’ve always been a little bit nervous about the glucose screening during pregnancy. I tend to worry about stuff like that.

When I was pregnant with my son I got so worked up and worried about it that by the time I had my finger pricked to check my glucose levels I was nauseated with worry and convinced I was nauseated because I was diabetic. Le sigh.

I’m really good at making myself nervous about stuff. This pregnancy was completely different. I really had no reason to think I was diabetic – I felt great and healthy so I had no worries this time.

Since I am using a homebirth midwife, instead of the typical sugary drink I had the option of eating a healthy breakfast. Both methods spike your sugar in the same way, but the meal contains protein and carbohydrates representing a typical meal.

I find this to be much more of a realistic scenario, instead of fasting and then basically drinking  a big ‘ol sprite. Doing that has to make any pregnant lady feel like turd.

Starting at midnight I was to start fasting – no eating, but drinking water was OK. By 8:45 am I was to take my last bite, and my midwife would be at my home by 9:30 am to prick my finger and check my blood sugar levels.

Here’s what I ate and drank: 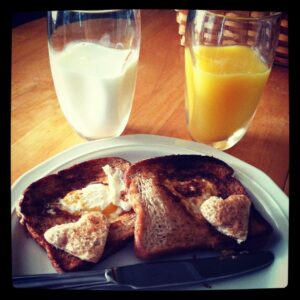 When my super cool midwife arrived at my home and pricked my finger, my blood sugar levels were at 104. She said it needed to be below 150 which means I passed!

If it were higher I would probably have to go do the three hour blood glucose test as opposed to the one hour glucose screening during pregnancy which I did.

In other news, Diana said my baby was head down (woot!), I’ve gained 18 pounds (woot?) and I’m almost in my third trimester (holy woot crap).

How much weight did you gain by the end of your second trimester?

And did you get to eat a meal or did you drink “the drink”?

Were you aware of your baby’s position at 27 weeks?

[…] even chose a breakfast alternative for the glucose test (Ezekiel bread, apple sauce and orange juice for the […]

I called my hospital the Royal women’s Melbourne today and advised them I can’t drink the drink due to dextrose allergy , both the midwife and the Obs head of maternity gave me a really hard time about it and spoke to me so rudely and condescending over it . It was so unessesary and awful . I just asked what my options were and copped it horribly . Now I’m left to wonder how supportive they are going to be of natural birth .

I am 30 weeks today and gained 17 lbs so far. My baby was breach at 28 weeks when I did my glucose test. I got my 4d ultrasound done today and now she is head down. But back to glucose testing, I had to drink the sugar orange soda or whatever it is. It was actually not as bad as I anticipated it to be. Didn't hear back from the doc, hope thats a good sign.

I think I'd already gained 30lbs. by that time. (Next time I'll know not to go overboard with comfort foods during the first trimester. Bad idea. This is also my first baby so I have to give myself a little grace. I'll have a better idea of how to handle nausea next time). For my glucose screening I got to eat breakfast in the morning and then a few hours later drink the sugar stuff (which was orange flavored and tasted like a melted otter pop). I went in to see my midwife 2 hours later and got my blood drawn (which wasn't bad because I had eggs for breakfast and I still wasn't hungry). Thankfully my levels were normal. And as far as I know my son has always been head down.

Gosh, it's so hard to cope with nausea I don't blame you one bit for eating comfort foods that made you feel better. At that point it's about survival, you know?