At dinner parties I like to tell stories about my backwards (retroverted, tipped, or tilted) uterus.

What is a tilted uterus?

According to the ultrasound technician that discovered my retroverted uterus, this is a normal abnormality because as many as one in three women have a uterus that tilts towards their spine instead of the bladder.

The cause of a tilted uterus is genetic, and many women may never know they have this condition. Some women, however, will find out at a most inopportune moment – when they go to their midwife or obstetrician in the first trimester and hope to hear the heart beat of their new little one.

My first prenatal appointment was scheduled for ten weeks and one day at our local birth center. I was so excited and very nervous. I had been feeling depressingly nauseous and tired, and I was looking forward to hearing the heartbeat of my baby. I thought that hearing the rhythmic beats would make my pregnancy more real because other than being sick I had nothing to show for it.

After going through the standard paperwork and Q&A of the first appointment, my moment was here. I reclined on the examining table and let the student midwife try to find the heartbeat with her handheld doppler.

Negative thoughts crowded my mind. My husband later remarked that I had a very serious look on my face. The midwife took over for the student and still more silence. My heart sunk. “I probably just wasn’t pregnant,” I thought to myself.

No heartbeat = no baby?

My supportive midwife encouraged me and said that many women do not hear the heartbeat at ten weeks and to try again the following week. The next week, at eleven weeks and four days gestation, I stopped in again for a heart tone check. This time I was with a different midwife who was determined to help me hear my baby’s heartbeat. I climbed back up on the examining table and she went to work. 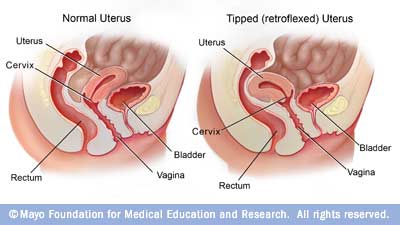 After another failed attempt to hear a heartbeat, and while fighting the thought that “I probably just am not pregnant anymore” I told my midwife that a few years ago an ultrasound technician told me that I had a backwards uterus.

Taking Matters In Our Own Hands

She then told me that she could manually move my uterus forwards via a vaginal exam which would put my baby closer to the doppler. I agreed and we began.

It was not very fun or comfortable, but my midwife’s hard work paid off and I heard the heartbeat of my baby!

It was a faint sound, but I definitely heard a strong rhythmic 150 beats per minute. I was so overwhelmed and happy! My husband gave me a kiss and I walked out of that appointment knowing for sure that “I was definitely pregnant”.

When Did My Tilted Uterus Flip Forward?

At some point at the end of the first trimester or the beginning of the second, the pregnant uterus will right itself and “flip” forward towards the bladder and the abdominal wall. However, at eleven, almost twelve weeks gestation my uterus obviously had not done that. W

hen I was fifteen weeks pregnant I started feeling these stretching, full, stabbing pains in my uterus. This lasted a short while, and then it stopped. I concluded that my uterus must have “flipped” forward, but a visit to my midwife would determine if that were true.

At sixteen weeks gestation I had my second prenatal visit and the handheld doppler was again used to listen to heart tones. This time was completely different. We heard the heart beat immediately – strong and loud at 145 beats per minute. I was right – my uterus had flipped.

If you’ve enjoyed this post, please check out my other post about my backwards uterus in my other pregnancy!

Thank you SO much for sharing this. I have no clue what’s going on or how far along I am, but I KNOW that I am pregnant. I have so many symptoms - smell sensitivity, hormonal brain fog, nipple sensitivity, enlarged areolas, leukorrhea, daily routine nausea & then sudden food cravings, poop is starting to have a green tint sometimes, occasional heart palpitations, new acne… the list goes on. I’ve gained 30# since October 2021 (140# muscular low fat frame plus new ~30# makes it quite obvious at this point). And I’m nearly certain I’ve felt a few faint flutters, but I’ve never been pregnant before so I don’t know what to compare to. I feel like I’ve just recently entered my 2nd trimester or am definitely getting close. BUT I’m confused. 3 weeks ago I tested <1 miu/mL of HcG (not sure if Dr used blood or urine despite me specifically requesting blood due to 4 weeks previously a urine stick test reading negative & me consequently reading up that certain factors can sometimes read a false negative pregnancy). 1st ultrasound done 1 week ago & the tech said I’ve stumped her (seemed to show a rhythmic heartbeat that seemed too quick for intestinal activity but she found nothing). This tech asked me if I had a tilted uterus. I didn’t know, but afterwards talking to my mom & learn that she & her sister both have one (& maybe the sis’s daughter aka my cousin; working on asking her). 2nd ultrasound yesterday morning, tech said no baby & I should consider getting checked for colon cancer :| nearly positive I don’t have colon issues as I’ve naturally healed myself 10 years ago from IBS & leaky gut & am very conscious of my BMs & overall intestinal/digestive activity. I have a BS in health science for crying out loud & use only natural remedies & thus REALLY go off what my body tells me the way humans used to be before this ultrasound bulls*it technology. Idk what else to do but wait & take care of myself. Unfortunately, I have a very much judicially laborious job as a farm manager. Fortunately, my direct supervisor is an understanding man but idk how long I can put off some things. I’ve got yet another primary Dr apt today to have her schedule me an annual pap smear, so finally I’ll see an OB/GYN or at least a gynecologist soon.

Please, share any & all feedback. It is so very much appreciated. <3

@Presli Dickerson, I am going through the same thing. I am between 33 and 35 weeks pregnant. I have experienced all of the above. My baby moves towards my back. I also have braxton hicks contractions. Please keep me updated. I'm sure that I will be delivering within the next 6 weeks. I am staying prayed up because I know God will get us through this. I am very scared because I had 2 c-sections over 10 years ago. I have never delivered vaginally. This is why they can't find my baby due to scar tissue blocking the waves on the transvaginal doppler. They do see fluid on my uterus coming from the back where the baby is planted. I have very light bleeding periodically. Glad to know that I am not alone.

Can a retroflexed uterus make the gestational sac look like an irregular shape on an ultrasound? I'm hoping the uterus SHAPE is causing the sac to look a little funny on the u/s. Currently 8.5 weeks. Thank you!

I'm37yrs old im 24wks4days Prego I'm diabetic and I have a tilted uterus. I had two miscarriages before this pregnancy and my OB/GYN said I was at a very high risk for miscarriage this time too. I bleed almost my whole first trimester but soon as I went into my second the bleeding completely stopped. I take insulin twice a day and I have to watch what I eat or drink constantly. Well i had a u/s done a few weeks ago by a specialist and they said my baby Boy is perfect. EVERYTHING about him is perfect I just started to show this past week and besides the irritation of growing pains it's been my more tolerable pregnancy yet. I'm very blessed and just wanted to show you all that there's always Hope in love and faith. Believe in your self and in your baby and everything will work out fine.

I have a retroverted uterus. Can this lead to infertility? Help me, what best sex positions can help me get pregnant...

Not in my experience.

Hi i have gone to 3 sonograms diffrent doctors some doctors tell me i have no gestional sac anymore other tell me theres a gestional sac but no baby they told me i have a tilted uterus and that makes it harder to find my baby acording to them i should be 10 weeks and 5 days pregnant i havent spoted since my last menstrual period but i do get back pain every once in a while they checked me for etopic pregnancy and said im okay and ny hcg levels seem to be doubling im scared for what can happen anyone who has gona trough this let me know please thanks.