I’m one of those people that finds out the sex of my kiddos before birth… and I’m typically impatient to do so (I am generally a very impatient person the first half of pregnancy).

Part of me wishes I could wait and find out at the birth… it’s so fun! I’ve been at plenty of births where the sex was a surprise. Not only was it motivational for a laboring mama, but it just made things VERY exciting.

But that’s not me.

About a month or so ago a friend of mine, at 13 weeks pregnant, told me that she had a 12 week ultrasound gender reveal and found out she was having another boy (her 4th!). I was so surprised she was able to find out that early… and that she is going to be a mom of FOUR little boys! Oh what fun! Anyways, I stored that little tidbit of information in my brain hoping that maybe I could be so lucky to find out in the first trimester too??!!

At 12 weeks I went in for my first trimester screening (which helps me to prove that I am low risk which enables me to be eligible for a homebirth) and while I was there I casually mentioned to them that they were able to reveal the sex of the baby for my friend. Totally casually brought it up. 😉

To which the tech replied that sometimes they can make a pretty good guess but sometimes the baby and its position won’t cooperate. Also, they stressed that it was JUST A GUESS. As in don’t do a gender reveal photoshoot yet or anything like that. Noted.

After the doctor left the room the tech and I noticed that the view of the baby was perfect for making one of those “pretty good guesses” and she asked me if I wanted to hear her guess.

So she said she was 70% sure (whatever that means) that it was a girl based on the angle of the baby’s phallus. 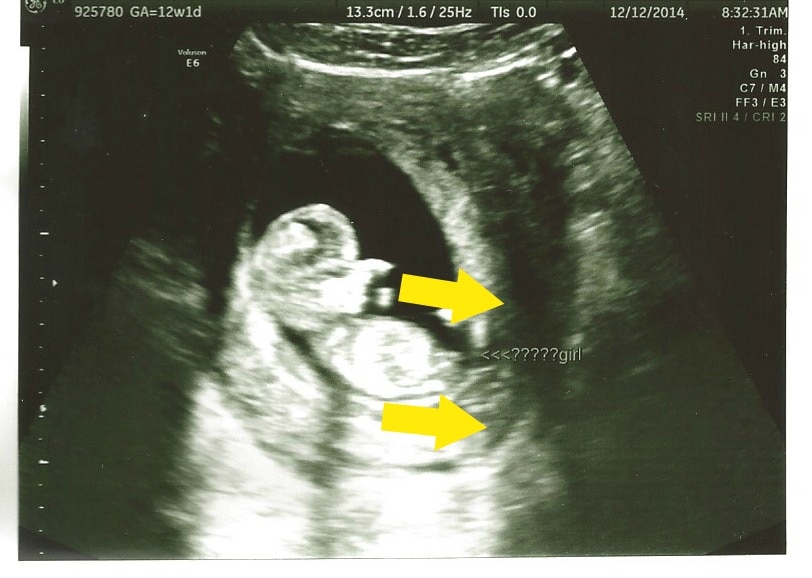 In a nut shell if the baby’s phallus is parallel to its spine then it is likely to be a girl.

If the baby’s phallus is angled up away from its spine then it is likely to be a boy.

So according to that blurry picture, the 70% accuracy and my gut intuition…. we’re having a girl! (But I’m not going shopping just yet)

In other parts of the internets this theory is called “the angle of the dangle”. Did this theory work for you? Were you able to find out early?

Here are some other finagled ways to find out what kind of baby you’re having (other than human).

Have you seen products like “Gender Maker” on Amazon? Apparently you pee on a stick and it’ll tell you boy or girl. Hey, they’re bound to be right 50% of the time right? 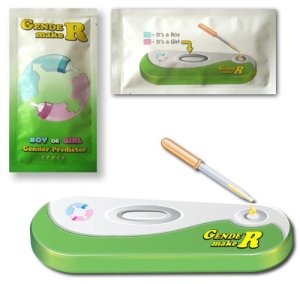 Have you heard about the new DNA blood test? Apparently you can have a blood test around 10 weeks pregnant which detects your baby’s DNA and therefore reveals the sex of your baby. Isn’t that wild?

Insurance, obviously, won’t be covering this sort of test unless medically necessary. If paying out of pocket you can expect to pay around $200-$800 or so. I think this is a great alternative for those who don’t get ultrasounds.

Did you find out?

Did you find out before birth? Did you wait? Or wait… was the ultrasound tech WRONG??!! Leave a comment below. I can’t wait to hear your stories!

[…] we are having another sweet baby GIRL! Just like my 12 week ultrasound gender reveal suspected, it is totally a girl!  I am totally […]

We waited to be surprised with both of our girls... I was pretty sure the first was a girl and was right. With the second, I was dead sure it was a boy... and was so surprised to find it was another girl.

I love being surprised and I was not keen on finding out early on the off chance that they were wrong.

it worked for us too! We found out at our 12 week scan we were having a girl, also based on the angle. They were right!

I found out the with my first two pregnancies. The twins I found out because everyone just told me after the bazillion ultrasounds I had to have. We chose to find out with our second pregnancy (and third girl). Next time I would like to wait and see. We will see if I have the patience and will to keep from finding out!