I do not have a green thumb. I kill plants. However, over the years I have successfully grown rosemary despite myself. Turns out rosemary is one of the best start plants to learn the art of gardening. Rosemary is an independent plant that needs little from people. I don’t even water it. I became so bold in my rosemary abilities, that this spring I learned how to propagate rosemary.

Gardening during pregnancy has many benefits. Fresh air, easy exercise, sunlight and connecting with nature and new life are important activities for a pregnant woman. Not only is it a great activity, you’ll reap the benefits in your home. Rosemary is one of those plants that will give you a quick win. Try it and see!

*Rosemary Essential Oil is not safe during pregnancy but the herb, used in moderation, it is perfectly safe.

If you are in your first trimester, having a threatened miscarriage or are experiencing pre-term labor symptoms err on the side of caution and limit the culinary use of rosemary.

(If you’re looking for a tea drink this pregnancy tea instead.)

Rosemary is an antiseptic and promotes healing. Rosemary would be a wonderful and fragrant addition to a postpartum sitz bath or even to help heal an umbilical cord stump.

Rosemary is a prolific herb that can be used for a variety of things.

Here are some ways I use rosemary around my home.

The main thing I use my rosemary for is to bake a whole chicken. It’s delicious. (That link <== right there? Best. Chicken. Recipe. Ever.)

When I make bone broth, I use rosemary as well. It smells delicious when its cooking! 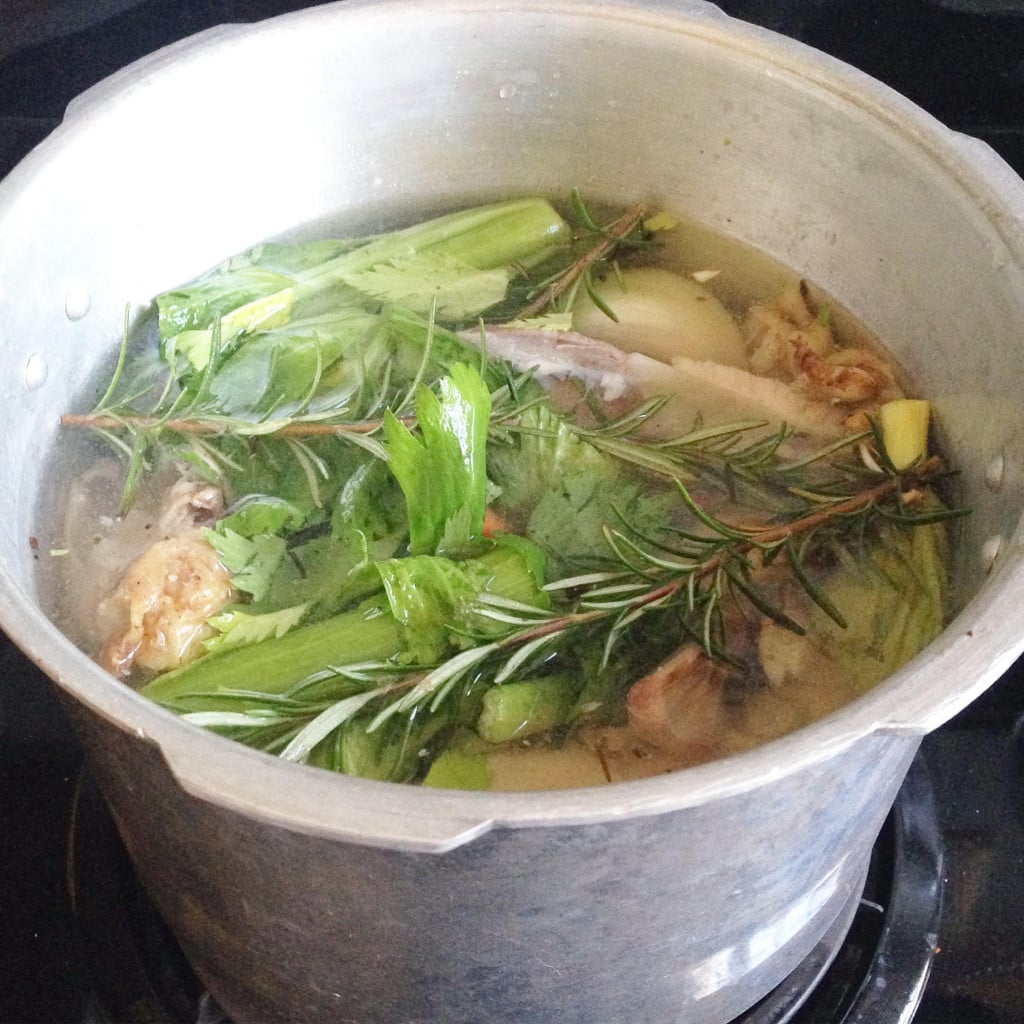 I also take cuttings and hang them upside down throughout my house. It smells great, and keeps bugs away.

Another idea is to place a sprig of rosemary in a bottle of olive oil to make rosemary infused oil. It’s so delicious! (Be sure to not let the rosemary bob above the oil or that piece will turn moldy. Gross.)

I think rosemary is so awesome that it should replace most ornamental shrubs. Why have plants that only look pretty? They should be functional as well. 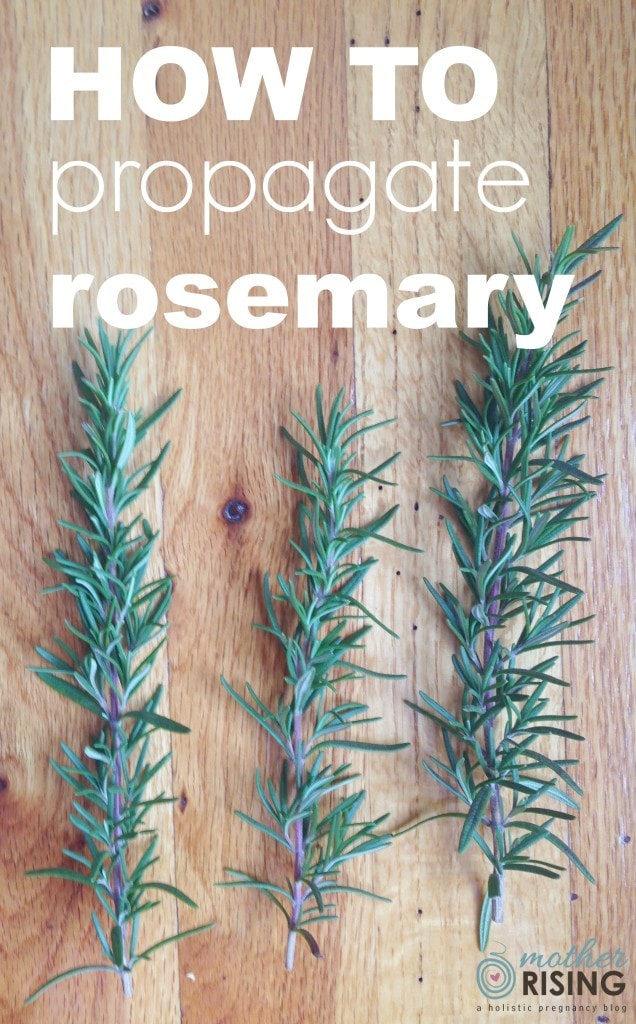 How to Propagate Rosemary

Once you have an established rosemary plant, a really neat thing you can do with it is take a cutting and make more rosemary plants. It’s super simple to learn how to propagate rosemary from cuttings. If I can do it, you can too.

Cut a piece of rosemary about 6-8 inches long that looks like it is newer growth. Brown, stick like stalks won’t do. Look for green and purple stalks. 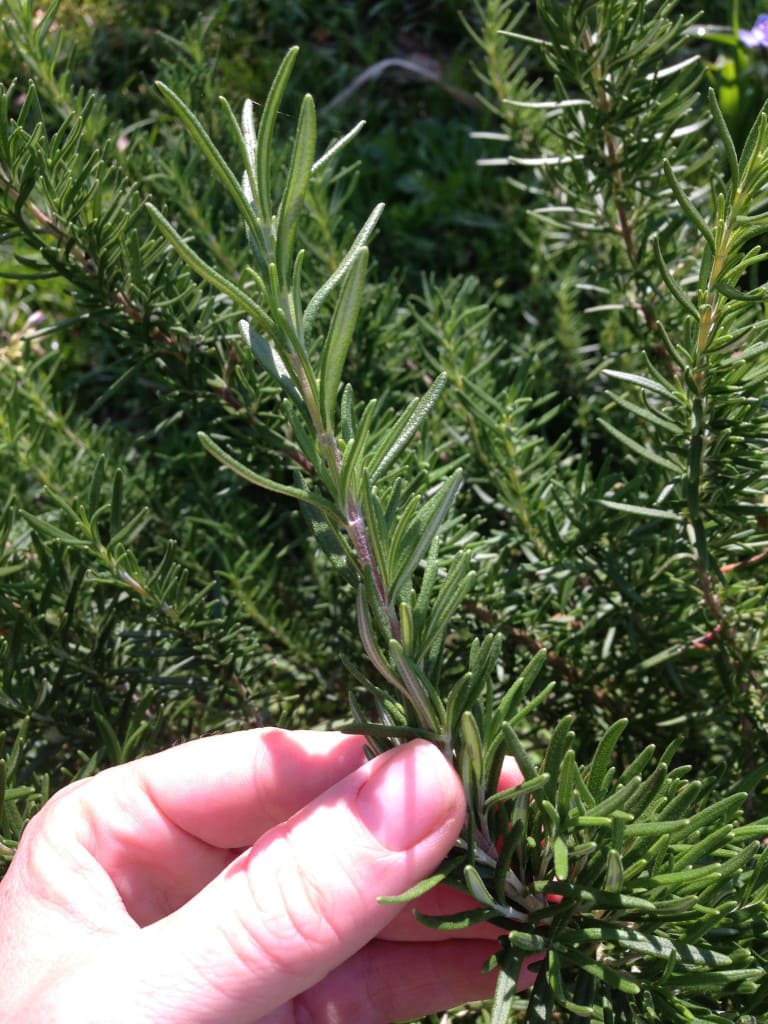 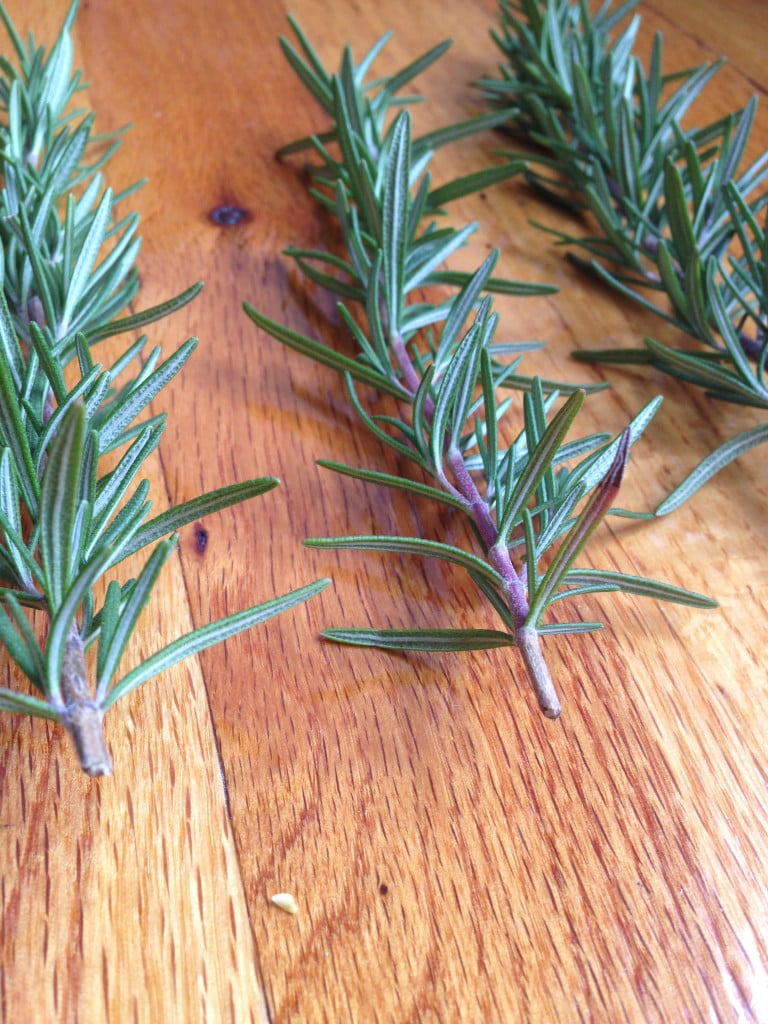 With your fingernails, strip away the outside of the lower half of the stalk. 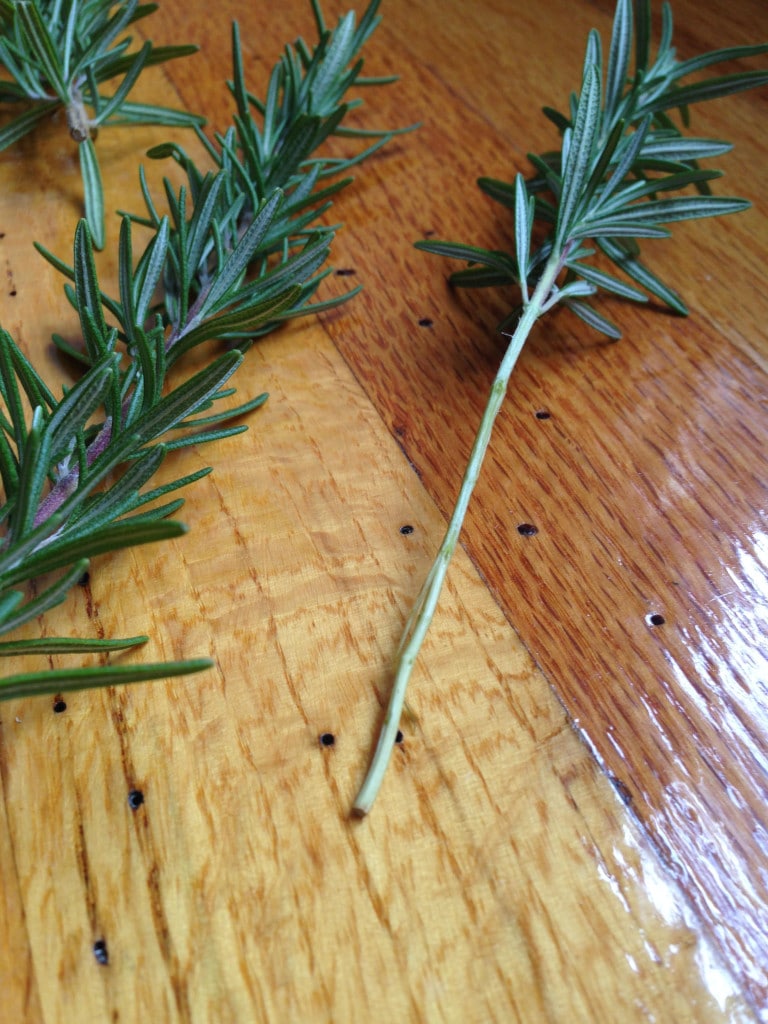 Place stripped stalks in water. I put mine in a mason jar on my windowsill by my kitchen sink. I made sure the water level was low enough that the rosemary leaves wouldn’t be sitting in the water. 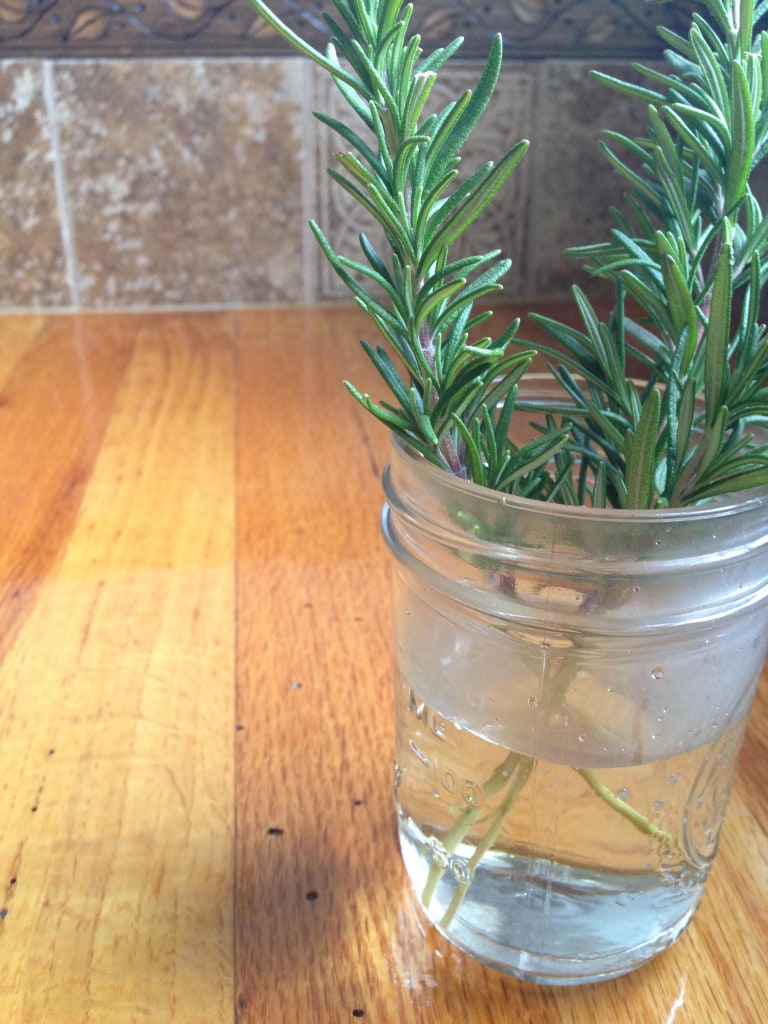 Replace the water every few days. Sometimes I even rinsed the stalks in running water when it seemed like weird things were starting to grow on the stalks.

I live in Florida and learned how to propagate rosemary in March and April. The weather is in the 50s at night in the 70s during the day. This whole process only took about a month. 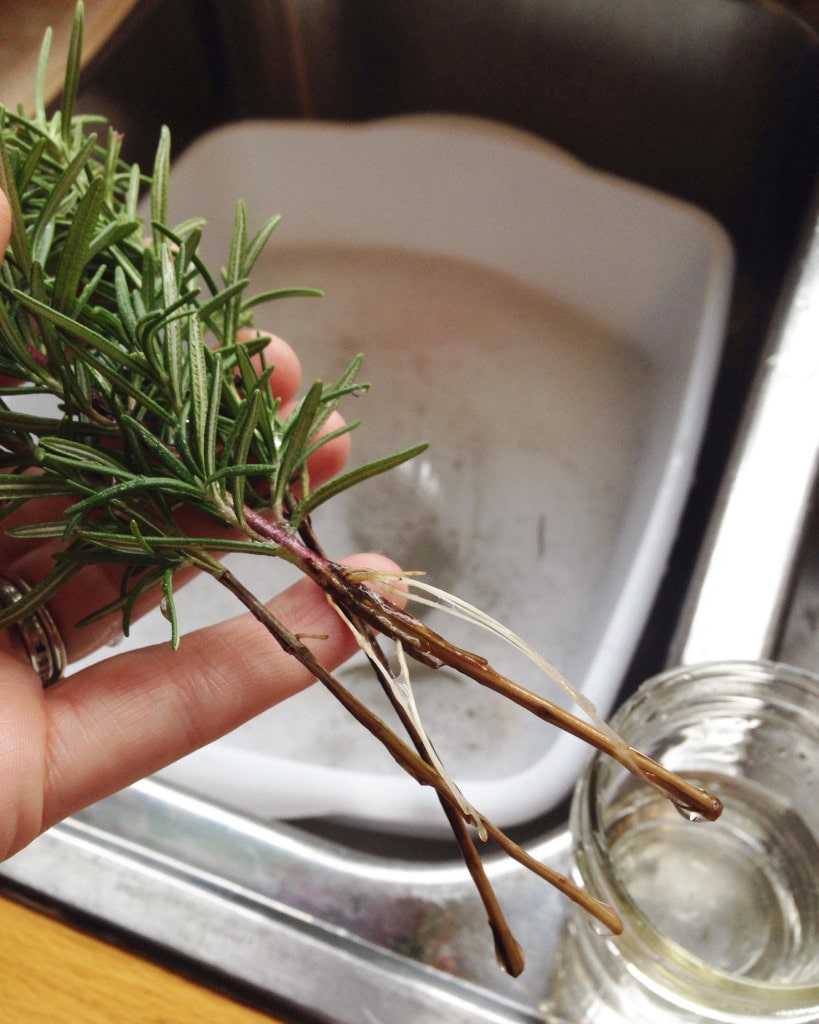 The photo below was taken about a week and a half after the one above. 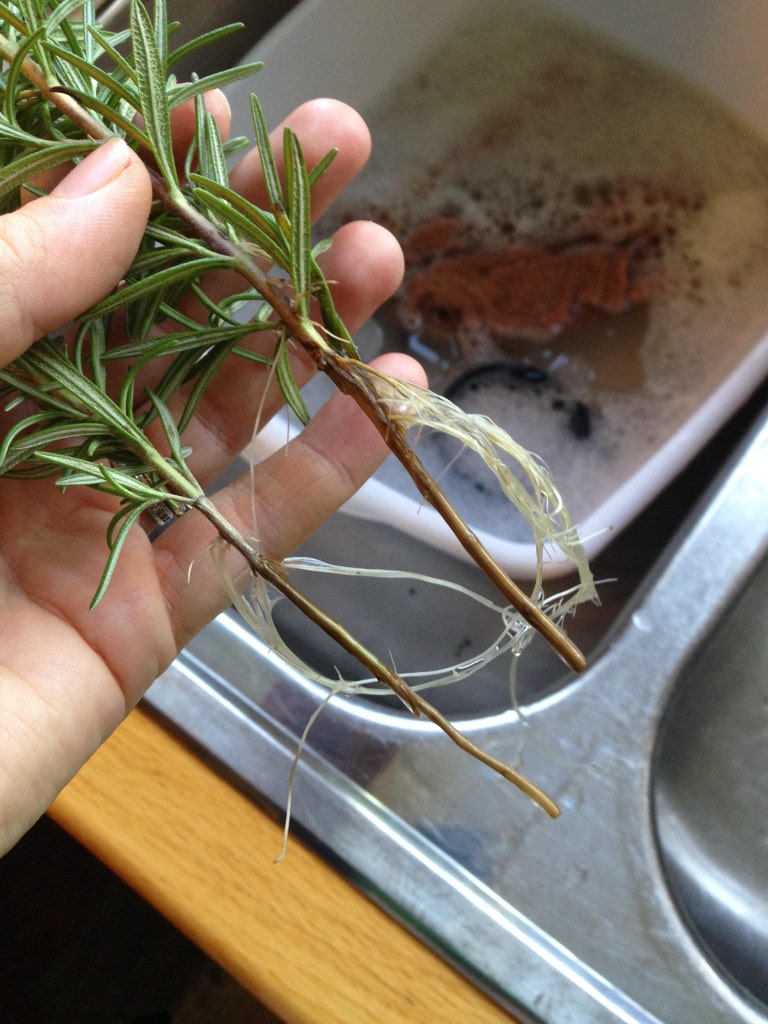 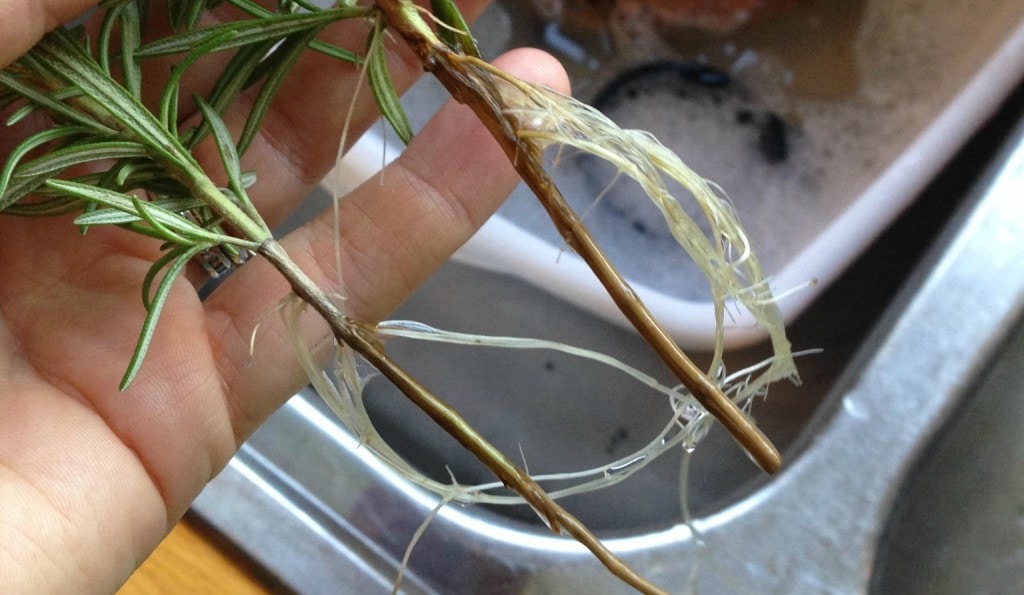 Isn’t it amazon to see where the roots emerged? For some reason I had it in my head that the roots would come from the bottom of the stalk, but they didn’t. They came from the sides!

Plant rosemary in healthy, well drained soil. Keep an eye on it for that first month and water it when necessary. Rosemary doesn’t like a lot of water, so it’s not necessary to keep the soil damp at all times. Once the roots have secured themselves, you can let the plant be more independent. I plan on giving these growing cuttings to some friends, which is a sweet gift idea!

Do you know how to propagate rosemary?

Leave me a comment and let me know about your experience!

I made rosemary tea- i cut up a few leaves and added it to black leaf tea. I have never had this amount of energy and alertness after coffee. I have to recommend it to everyone :P

[…] Rosemary, mint, oregano, aloe, and succulents have been hard for me to kill over here in North Florida. Leave a comment and let me know what you’ve successfully grown (or want to grow) where you are! […]

Can you have a rosemary plant growing indoors? If so, what kind of light does it like? Thank you! Lynn

Do the roots appear in the portion where the stem is submerged or where it is just above the water?

Hmmm... I can't remember. Have you tried it yet?

I live in WI and we have very cold winters. I have two rosemary plants that I put outside in the spring/summer and take them in the house for the late fall and winter. I have been doing this for years with no problems and the plants have grown into a nice size.

Last night I had a Racoon visit. I don't know if it sat on the plant or was digging in the soil but the pots were knocked over and the Rosemary branches broke off. I have a live trap and was able to catch it and it is now relocated.

Anyway, I am thankful to know that I can start new plants in water with the broke off branches. I pray that I am successful .

Thank you for the great article.