To tell some of our family and friends that we were expecting (back in 2008), I decided to do a fun little photo collage. I dragged my husband/daddy-to-be on our front porch and snapped some pictures. Later, I used some editing software and made a pregnancy announcement. 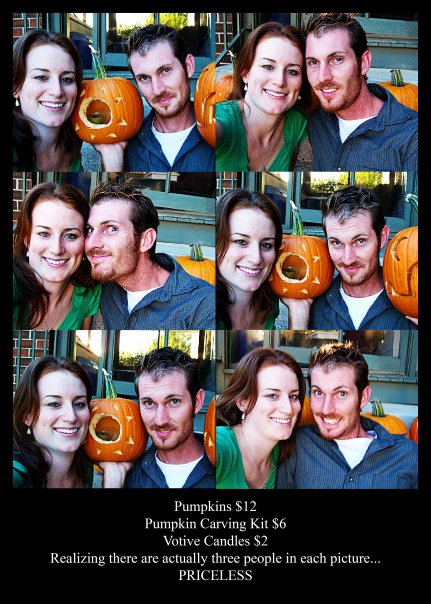 I think this is one of many really cute pregnancy announcement ideas, but only if you change one thing.
If there was a full body shot of me I think this would have made more sense. I realized this when we were taking the pictures, but there was no timer on the camera so the only thing we could do was selfies.

Did you create a pregnancy announcement?

So, now that we’ve giggled at my cheesy way of announcing our pregnancy, how did you do it?
Did you tell certain people at different times?
How far along were you when you announced it on facebook?
Leave a comment and let me know!

10 Signs You're in Denial About Pregnancy | Mother Rising

[…] for fun, check out a previous pregnancy announcement here and here.  The third time around (the photo above) I had no energy to take a family picture.  I think it […]

Cute collage! And we had a similar announcement experience. For my first pregnancy, we bought our parents photo frames that said "#1 Grandparents" or something corny like that and put a photo of us in it. When we gave it to my mom, she looked at it, told us it was nice picture of us and she would put it on her bedroom dresser. My husband and I just started laughing and told her to read the frame. Even after doing that, my mom still seemed a little bit confused. Finally we just came out and told her - you are going to be a Grandma!!! : ) Oh well, the best intentions...