Many women have had procedures done to their cervix. Here’s what you might not have been told about how cervical scarring can impact a birth.

Cervical Scarring and “Failure to Progress”

I have seen many a cervix refuse to completely open big enough (10 cm) so that a mama can start pushing. There are many, many, many reasons this can happen. One of the reasons is because of cervical scarring. 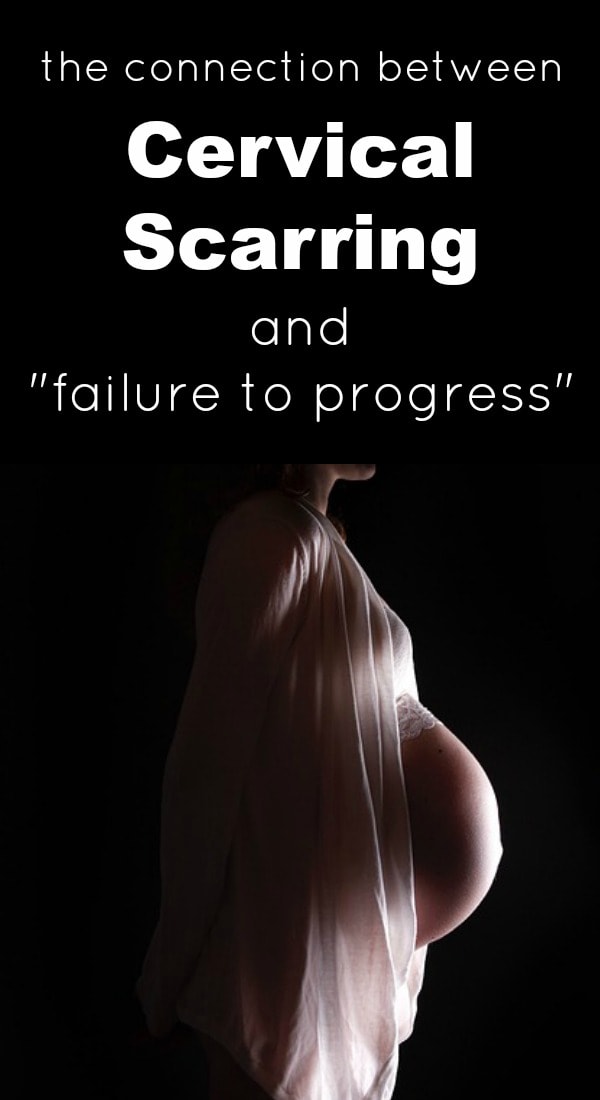 I once was hired to be a doula for a beautiful woman who was very happy to be having her first baby. She and her husband were so loving and worked well together. They seemed very much in love, happy and excited about their new baby.

I got a call in the evening to come on over to her house so I could labor with her and help her decide when to go to the hospital. Her contractions were coming regularly, noticeably intense and she was managing beautifully. She was SO ready for this.

After much debate, we decided to go to the hospital so she could see how dilated she was. The receptionist at the front desk said that “triage will see her in a few minutes to see if she is in labor.” I was slightly offended the receptionist would say that to her and replied, “Oh, she’s in labor.”

I waited for an eternity in the waiting area, got fed up, and marched myself back to triage to see how she was doing. To my amazement, she told me she was only dilated to one cm. I was flabbergasted, confused, empathetic, and discouraged. If I felt all that, imagine what that mama felt!!

We went back home, continued to labor and when she could take it no longer we went to the hospital again in the middle of the night. She had no further cervical change, but they admitted her so that they could help her sleep.

I (and obviously the mama) walked away from that experience in a fog. How could this happen? Are our bodies really lemons? What happened back there?

As I processed this birth I remembered something the mama told me and her doctor during her birth. She told me that she had cervical scarring from a procedure that was done to her cervix when she was a teenager. I didn’t know what this meant, or what this meant for her labor at the time, but now I am well aware.

You see, sometimes scarring on a cervix can prevent the cervix from dilating/opening during labor. Nobody tells women this when they get D&C’s, D&E’s, biopsies, incisions, surgeries, etc. that this procedure might impact any future childbirths they have. My client sure had no idea.

One thing I learned since then is that sometimes if the cervix is not dilating during labor due to cervical scarring that a gentle massage of the scar tissue can help it to dilate.

I think there are a few morals to this story.

Have you ever heard of this issue? Leave me a comment and let me know what you know.
Click here to cancel reply.

I just found out that I have scarring, probably from my first hosptial birth. A nurse said she was checking me, but actually "stripped my membranes." I was clawing my way out of the bed, it was so incredibly painful, and the contractions were so very sharp on my cervix afterwards. I think she stretched me as far as she could when I was only 1cm. Come baby number two, labor was back and forth for a few days, but kept fizzling out. I finally got some some tinctures from my midwife to progress labor. The pushing was absolutely uncontrollable, and I tore pretty badly, even though with the epidural birth I had no tearing. I had an exam over a year later and found the scar tissue from the first birth. Now it all makes so much more sense to me. The midwife for baby #3 said starting at 38 weeks to put evening primrose oil on the cervix to soften the scar tissue, and it will break up during dilation this time around. I've also heard of it being used to soften cervical lips during stalls in labor. I'm hopeful for a much better experience this time around!

I definitely had cervical scar tissue and had to fight to have a natural birth. I had previous procedures and was never warned about the scarring that could take place. Lucky for me I found this article at 38 weeks pregnant and realized that the 'tight hands that was mentioned each check was actually scar tissue. I had two be induced almost two weeks after my due date and had the midwives massage the scar tissue after each check. It was extremely painful and took 36 hours of labor but I am so happy I fought for a natural experience.

I have heard of some midwives recommend vaginal EPO to help soften scar tissue prenatally when a mother is know to have scarring. I don't know how successful it is, but it is definitely worth a try under a care provider's supervision!

I was told I had cervical scarring during labor for my first child, and the midwives did try to "gently massage" it several times, which then turned into trying to break up the scar. It was incredibly painful. I would not use the word gentle to describe it in any way, and it was also not productive to any extent. The actions of trying to break up the scar tissue made me want to transfer to the hospital, as the pain became unmanageable. I labored in total for 48 hours before begging for a c-section. My new OB has advised me that in no way do cervical procedures cause a scar that is significant enough to keep the cervix from dilating, that could not have been the reason for failure to dilate, and that I should and can try for a VBAC in the hospital with her supervision. She is the third OB to laugh when I told her the midwives thought I had scar tissue as a reason for failure to dilate. Just putting this out there in case this unscientific study you're speaking of is incorrect. No mama should be tortured like I was. There are many reasons a woman cannot progress in labor. If you're not progressing, do you really think a gentle rub will get things going?!

Whew. That sounds like torture. I'm so sorry. I hope you can find healing from that. ❤️