Considering the physical and emotional stress that accompanies the third trimester of pregnancy, it’s understandable that many parents wonder if eating pineapple to induce labor actually works. I mean, common, if all it takes is eating pineapple to go into labor, this information needs to be made public and pineapples need to be dolled out en masse during that final month of pregnancy.

But does pineapple to induce labor really work? And if it does, should pineapple be avoided during pregnancy to avoid miscarriage or preterm labor? Also, how much pineapple needs to be consumed in order to cause contractions? Which is best for natural induction purposes – fresh, frozen or canned pineapple? Does the core need to be consumed? Can the same effect be achieved by juicing a pineapple, drinking it, and calling it a day?

This and much more than you ever wanted to know about using pineapple to naturally induce labor is discussed in this blog post. Let’s get started!

Using pineapple in attempt to naturally induce labor is pretty non-invasive, especially when compared to using Pitocin. Even if eating pineapple does not start labor, there are some pretty great benefits to eating this tropical fruit! (SOURCE) 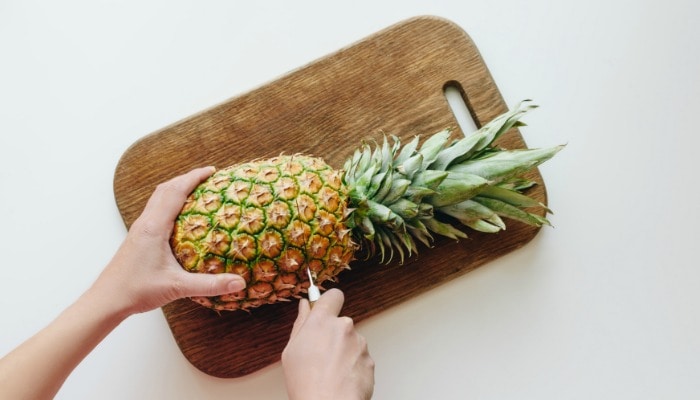 In my experience, the more desperate a woman is to go into labor positively correlates with the amount of pineapple she is willing to consume to make it happen. At some point, however, certain things become less helpful when consumed in high quantities. There’s such a thing as too much pineapple! Too much pineapple can cause:

The Research on Pineapple to Induce Labor

Unfortunately, there is little research on the topic of using pineapple to induce labor. But the same time, ask any woman you know, anywhere around the world, and she’ll likely know someone, somewhere, with a story about using pineapple to “get the baby out”. For example, ripe pineapple has been used orally as traditional medicine in inducing abortion in India while the juice of the unripe fruit was used for abortion in Bangladesh. (SOURCE)

In the best study available on using pineapple to induce labor, freshly harvested pineapple, including the core, was used to make pineapple juice using a juicer like this one. This makes sense as many foods are more nutrient dense when they are fresh and eaten raw. Bromelain, the enzyme in pineapple thought to cause contractions, is likely most potent at this point. Freshly picked, raw, juiced pineapple, including the core, should be used when consuming pineapple to induce labor. (SOURCE) 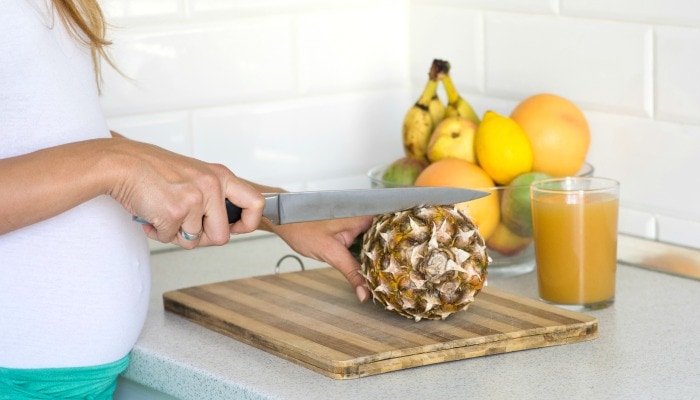 Can Eating Pineapple in Pregnancy Cause a Miscarriage?

In the same study on using pineapple to induce labor, it was shown that eating or drinking pineapple did not cause any miscarriages or abortions. Despite ingesting pineapple juice before pregnancy became full-term, each pregnancy resulted in a full-term birth. Eating pineapple remains relatively safe in pregnancy. (SOURCE)

Can Pineapple Help Ripen the Cervix?

Anecdotally, I’ve often heard that the main benefit of eating pineapple at the end of pregnancy is not to cause contractions, but to soften or “ripen” the cervix in preparation for labor. Unfortunately, there really isn’t much research to support this claim. However, given the health benefits of pineapple, it wouldn’t hurt to try. 😉 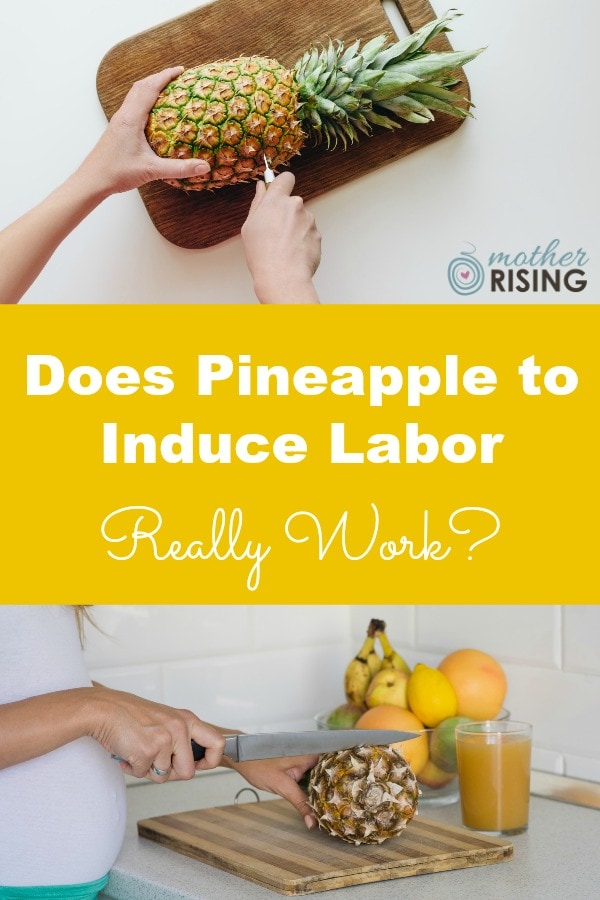 The thing is, when pineapple juice is placed directly on a uterus, it actually does cause strong contractions. Bromelain contracts the uterus in a similar way that oxytocin, or its synthetic Pitocin, does. Isn’t that wild? (SOURCE)

However, pregnant women don’t pour pineapple juice on their uterus, they drink it. Therefore, yes, pineapple juice can cause contractions and potentially labor, but not when it’s digested and metabolized. It’s safe to conclude that pineapple does not induce labor naturally. No matter when you try (35 weeks, 36 weeks, 37 weeks, etc.), or how much you eat, pineapple is not going to induce labor. Sorry.

“I ate an entire pineapple, core and all, when I was pregnant with my first. Boy did my mouth HURT. And nope, no labor.” Heather F.

“I ate a whole pineapple every day for 4 days in a row and it did nothing that I could tell except make my mouth raw.” Lucy H.

But just to confuse you, you’ll always hear about that one person that successfully used pineapple to induce labor. 😉

“Juicing a pineapple worked for me – I went into labor that night. I had been having prodromal labor for weeks though.” Katie G.

“I had been craving pineapples and pineapple juice for weeks before I delivered. The day my water broke, I had eaten a whole pineapple and drank about 3 cups of pineapple juice – it was all that I wanted. Not sure if there was a correlation, since I had already been craving it. I never ate the core and went back and forth between fresh and canned.” Shawna M.

(SIDE NOTE: I think it would be cool if this phenomenon (pineapple juice coming into contact with a uterus and causing contractions) was extensively researched and an alternative to Pitocin was created. Just sayin’.)

Pineapple Recipes and How To

The following is some practical advice for preparing a pineapple to attempt to induce labor. Have fun!

How to Cut a Pineapple

So, you bought a pineapple and it’s on your kitchen counter. What’s next? Watch the following video for the easiest way to cut a pineapple.

Check out Mother Rising’s recipes for green smoothies during pregnancy. Not only are they delicious and nutritious, but THEY CONTAIN PINEAPPLE. Woohoo! 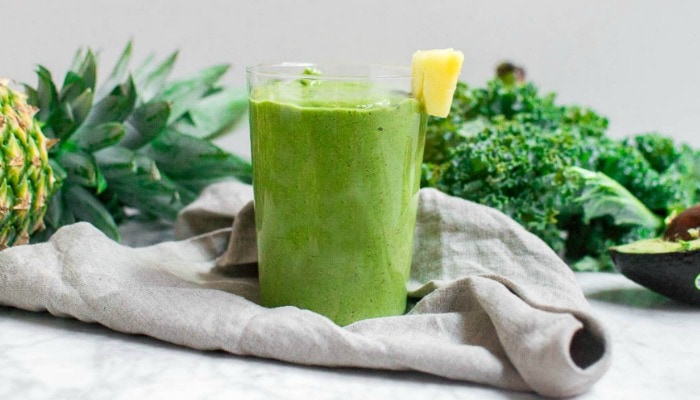 If you’re also considering castor oil as a method to induce labor naturally, hop on over here to learn more.

Do You Think Pineapple to Induce Labor Really Works?

After reading this article, what are your thoughts? Do you think pineapple to induce labor really works? Do you have experience with it?

[…] out my posts about inducing naturally with things like castor oil and pineapple juice! […]

I ate raw pineapples and drank castor oil at 37 weeks pregnant like around 3pm and I started to feel contractions around 6 PM and when 7pm came around I noticed I lost my mucus plug after I lost my mucus plug. I was having strong labor contractions which I ended up in L&D around 9 with my cervix at 4cm and not even and hour.i was at 10cm ready to push but going thru all that I had a safe delivery with my son I would so do it again. It worked for me so I'm sure it'll work for anyone.

I'm 39 +4 days my due day 7th may ... I been told 2 try pineapple..so got 1 this evening eat half a pineapple let c if it works ..gonna eat other half tomz mornin finger s ceiss it start my labour off

Holland and Barrat now sell Bromlain in a capsule, reckon you could stick one of those up your lady bits?