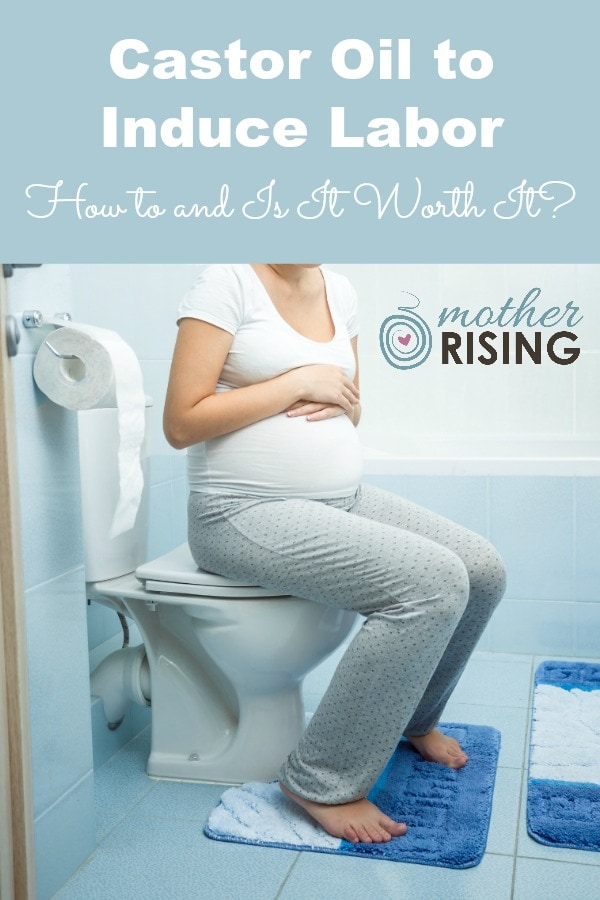 WARNING:  Castor oil to induce labor should never be used independently of a care provider. Only when you have the guidance and approval of a trusted care provider, should castor oil be considered and administered.

How Does Castor Oil Work?

Castor oil is a laxative, meaning that it makes the body poop (a lot!) and clears out the bowels. Bowel stimulation also stimulates the uterus, leading to contractions, which can increase signs of labor, start labor, or make labor stronger.

Unfortunately, rubbing castor oil on the belly does not induce labor.

According to research studies, 57% of women are more likely to go into labor within 24 hours of a dose of castor oil. It’s important to note that pre-castor oil, the women in these studies 1) were not having regular contractions and 2) were between 40 and 42 weeks pregnant (full-term). Also, 3) castor oil increased their Bishop Score, which basically means their body became more favorable for labor and a vaginal delivery. (SOURCE, SOURCE)

According to a different research study, taking castor oil to induce labor was effective with women experiencing premature rupture of membranes (PROM) and was therefore a better option to induce labor than pitocin. (SOURCE)

Oddly enough, another research study says it does no harm, but also has no benefit. (SOURCE)

When To Take Castor Oil?

I am passionate about helping women have a healthy pregnancy, natural childbirth and a happy postpartum. Therefore, I don’t recommend starting or even encouraging labor before mom and baby are completely ready, even if all that is used are natural ways to induce labor.

According to the March of Dimes, babies need to stay in until at least 39 weeks. Babies born too early may have more health problems at birth and later in life than babies born later. Being pregnant 39 weeks gives your baby’s body all the time it needs to grow.

Here’s why your baby needs 39 weeks (from the March of Dimes):

I am a huge advocate for natural, hands off birth and letting the body do its thing. It’s a big deal to induce labor, even when using natural ways to induce labor. However, sometimes special circumstances (MEDICALLY NECESSARY) arise that call for getting things started.

In these special circumstances, it may be wise to use natural methods to induce labor before using medications like cervadil or pitocin. Natural methods of induction are typically more mild and safe for mom and baby.

If for whatever reason baby needs to be born, use castor oil to induce labor at 39 weeks at the earliest, preferably 40-42. However, in my opinion castor oil should only be used as a last resort before moving towards more pharmacological methods of induction.

NOTE:  In a study on castor oil and induction, women were given castor oil to induce labor between 40 and 42 weeks. There’s likely a reason they didn’t give castor oil to women prior to 40 weeks. The perceived benefits didn’t outweigh the potential risks! (SOURCE)

How Much Castor Oil Does it Take to Induce Labor?

When I took castor oil during my third birth, I drank three ounces of castor oil under the guidance of my midwife. In research studies, women were given 60 ml of castor oil, which is a tiny bit more than two ounces. (SOURCE)

My midwife always said, if you were going to take castor oil to induce labor, go all in. Don’t waste your time with tiny amounts. Go big or go home. 😉

To use castor oil to induce labor use the following instructions.

Ingredients Needed: Castor oil (I like this brand), gentle baby wipes (like these), and beverages to avoid dehydration 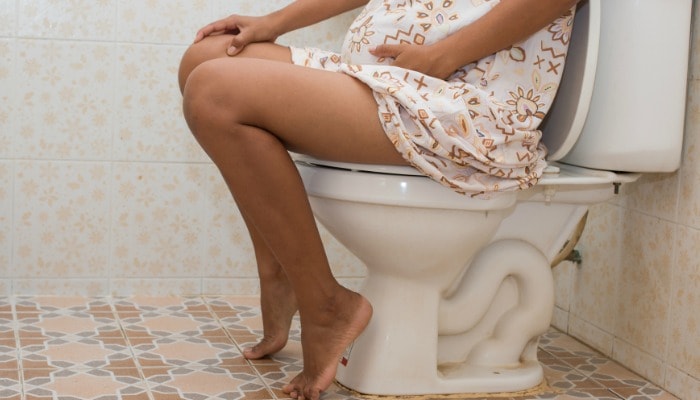 Once upon a time I was 40 weeks pregnant with my third child. Late Saturday evening my water broke, but strong labor never followed. Eventually, after trying a barrage of natural labor induction techniques, my midwife and I decided to use castor oil to induce labor. Here’s my story.

“Later on we ate breakfast, my kids went over to my neighbor’s and then we chatted with my midwife about what our plan of action should be. Nothing had changed for the better, if anything it seemed like my contractions were even wimpier and further apart. We decided that I would do castor oil and castor oil is what I did.

Matt went to a drugstore and came back with a 4 ounce bottle of that nasty stuff. I drank about 3 ounces of it. I wasn’t messing around anymore. This was at 10 am and we immediately took naps knowing that I would soon be pooping a lot, trying to have a baby.

At this point I was having contractions about 2-3 minutes apart. I decided to check myself (used a sterile glove to minimize any potential infection) and noticed the baby was lower than previous days, but I couldn’t really tell if there was any progress with the cervix. The glove made things feel even weirder than usual.

I spent that afternoon on the toilet and napping. I ate something at some point, but I can’t remember what. And of course, I stayed very well hydrated.

Here’s a text I sent to my midwife (I was starting to get in a bad mood from all the pooping), “I had a moment on the toilet where my bowels were going nuts and I had to pull back because I wasn’t sure if I was feeling a teensy bit pushy or if my ass was exploding.”

Yeah… that’s castor oil. Use only as a last resort, people!

Later my contractions were coming every 2-5 minutes apart and were definitely stronger than before. Around 2 pm I told my midwife maybe she should come over but not to sue me if everything fizzled out. She, as usual, didn’t care about false alarms and wanted to help me and do her job. I love her.

She got there around 3 pm and things… FIZZLED OUT! I was not crapping myself 24-7 anymore (only periodically at this point) and when that went away, my contractions went back to their previous wimpy pattern. How frustrating! How bizarre!”

For me, castor oil did not immediately bring on labor. Perhaps castor oil did increase my Bishop Score, which is always helpful. I later went on and received Pitocin, which worked quite well, and had a baby early the next morning. (To read the rest of my birth story head on over here.)

SIDE NOTE:  I did not poop while pushing out my baby. There was nothing left to poop! Yay castor oil.

For what it’s worth, I personally know a good handful of people that have found success with castor oil.

Pulling the trigger to try castor oil to induce labor should bring you pause – it’s a big decision. Use the following list, along with your care provider, to figure out the best course of action for you and your baby.

A friend of mine that’s a midwife at a local freestanding birth center uses both of the following castor oil recipes to induce labor with her clients.

Instructions:  Combine ingredients in a blender. For the best experience, drink entire “milkshake” with a straw.

Instructions:  Combine ingredients in a blender. For the best experience, drink entire “smoothie” with a straw.

Of course, castor oil is not the only option for a natural induction. Isn’t it nice to have options? Speak with your care provider to discuss other methods of induction besides castor oil. I bet they have even more ideas and information to share with you!

Castor Oil to Induce Labor: How About You?

Did you use castor oil to induce labor? What was your experience?

Leave a comment and share your story with the Mother Rising community. We’d love to learn from you!

I've drink castrol oil at 1 o'clock n also at 4 but none has happened since i have more than 40 weeks..no side effect no what

I used castor oil with my 2nd and 4th baby! I took it and within a half hour my contractions were 5min apart ! I ended up delivering within 4 hours both times!! I didn't get sick surprisingly either! Guess it works differently with everyone lol

Hello can you please tell how much did you take both time?

Oh goodness this had me laughing! I was 40 weeks and 2 days, and after a miserable pregnancy I was so done. I decided to try this and boy were you right about the pooping. So much poop haha! I also couldn’t keep water down you I ended up super dehydrated. After the flood of poop stopped, I almost immediately started getting contractions. I’m not talking, beginning labor contractions, but the real thing about 4-5 minutes apart. I had still expected to have slow beginning labor signs but I didn’t, I went straight into active labor. After an attempt to take a shower and get myself looking pretty for labor (thanks social media for unrealistic expectations), I simply couldn’t finish getting ready and was in agony! We ended up going to the hospital and they confirmed I was in active labor. From first contraction to baby only 6 hours! I was amazed how much better I felt after they gave me fluids. I was able to go through with my unmediated labor after I was dehydrated, but before fluids I was DYING. That being said, hydrate!!!

I took castor oil the day before my due date at 7pm and had my baby the next morning at 3:30! Which was a whole lot different than my first born, I was in labor for almost three days . I pooped a bit after i took it but I never threw up. It actually made it nice after I had the baby cause I had to go to the bath room but the diarrhea helped it not to hurt as bad. I got constipated after my first born. The only thing is we waited too long to get to the hospital and it was too late for an epidural.

[…] out my posts about inducing naturally with things like castor oil and pineapple juice! […]