Here’s the story of my cervix in early pregnancy. Because this is big news and it must be shared.

If you are one of my diehard readers and keep up with all my miscellaneous posts you will know that a review of the DivaCup a few years ago was a major bust because my cervix enjoys hanging out about an inch or less (depending on its mood) above the opening of my vagina and rejects all objects that sit below it like menstrual cups and tampons. At first I was embarrassed by the change in my anatomy (a change that happened after giving birth) but I’m slowly starting to embrace my anatomical quirks. Hey, I even joke about it during pap smears to help relieve my tension about the procedure. I’m laughing anyways.

Also, if you follow my posts you may remember the one about how I check my cervix during pregnancy and how you can do. Thanks to Toni Weschler and her book Taking Charge of Your Fertility I am a self-proclaimed cervix checker my friends! I should make a tshirt that says just that.

The cervix in early pregnancy should be closed and have some length to it, which is what my midwife confirmed after I came in to her office at 4 weeks freaking out because a) I was unexpectedly pregnant and b) bleeding (always bleeding!!). At 8 weeks I was still bleeding/spotting and assuming the worst (this is common if you’ve had early losses like myself) so they gave me an ultrasound which showed that my cervix was still closed and long despite the spotting and bleeding (UGH I hate bleeding during pregnancy!).

During these weeks of assuming the worst, waiting and then realizing that I was still indeed pregnant (maybe I would have a baby after all?), I continued to check my cervix just to see what was going on and if anything were changing. I figured that if I had a general idea of how things were, going forward if anything changed I would know (what I would do with that information I wasn’t quite sure).

Nothing changed with my cervix during the first trimester. It continued to be low, but it was closed and long. Despite it being closed and long it felt gushy. 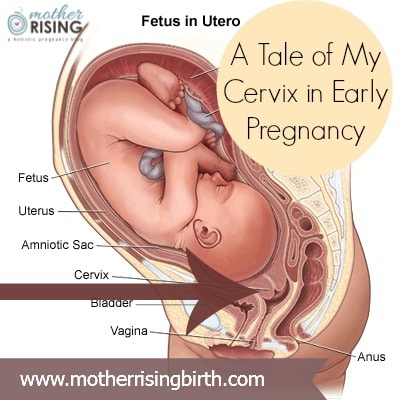 Enter the second trimester and I started to notice some changes. Positive changes I might add!

One thing that I started to notice at about 14, 15 and 16 weeks was that my cervix had started to move more posterior, that is, towards my back. As pregnancy progresses it is normal for this movement of the cervix to happen. In fact, one of the goals of labor/contractions is to bring the cervix back to the front (anterior) so allow for dilation to happen.

Another change I have noticed in the second trimester of pregnancy is that my cervix is slightly less gushy and more firm.

I think that the combination of a firm and posterior cervix helps support the weight that is to come from a normally progressing pregnancy. If you think about it, if my cervix remained low and anterior as my pregnancy progressed my uterus would fall out of my vagina! Or at least that’s what I imagine would happen. Firming up and removing the cervix from “the exit” makes so much sense to me.

This completes the tale of my cervix in early pregnancy. Of course, I will keep you abreast of any changes in my anatomy as this pregnancy progresses. Because it’s that important.

If you enjoy these tales of my anatomy, you will probably enjoy this post: A Tale of My Tilted Uterus.

Another thanks for this post! I’ve been using menstrual cups for ages, so I know when I have my period my cervix is quite low. I don’t remember where my cervix was during early pregnancy for my 3 kids, but I have had several miscarriages so am now on progesterone and dang! That thing is low! I know whenever I investigated late in pregnancy my cervix was high, and I had thought it was “supposed” to be high at ovulation and through pregnancy, so have been worried that it is so low. Everything else seems fine though (saw the heartbeat a few days ago!) so I’ll stop stressing. Or, I’ll stress slightly less, at least ;)

You're so very welcome!

This is a late post! But I’m curious if the whole cervix goes soft/gushy? Does that include the tip of it where it is closed? Thanks!

Hello Lindsay! I am so happy I found your blog and particularly this entry! Thank you so much for sharing - I could totally relate and it has made me feel tons better (though I still have a few questions ;-) )! I have a 5 year old daughter and am once again pregnant (after trying for over two years unsuccessfully). We are incredibly excited although a bit worried as I am spotting intermittently (I have a scan this friday to check everything is OK). But what worries me the most was that my cervix was so low - like when I am about to have my period - about 1 inch above the entrance of my vagina. Reading about your exeprience has been very reassuring! Prior to my first pregnancy I used to use menstrual cups and absolutely loved them. When I realised I couldn't use them anymore after giving birth, it was a real shock and it took me a lot of time to accept it. I tried everything: Kegel exercices, Epi-no pelvic floor trainer, working on my abs... And although I more or less toned my pelvic floor muscles, my cervix remained desesperatly low. Now that I am pregnant again, I am really scared that my cervix and my pelvic floor are not going to a be able to support the baby's weight. I am scared that the doctors are going to put me to bed rest for months. So my question is, how did your pregnancy go? Does having a low cervix prior to pregnancy cause any problems during the pregnancy itself? I would love to hear back from you! xxx

Short answer - Nope! All was well. During pregnancy the cervix actually moves up and goes quite posterior. Hope that helps!

Hi there! Does the cervix “rise up” during pregnancy? Mine was low for a while and now it’s harder to find. Is that normal?

Hi Lindsey! How often did you check your cervix? I checked once a couple of days before 16 weeks and that was it.

I can't remember, honestly. It was so long ago! I bet it was more often than I'd care to admit though. I was so curious!