Want to give birth like an animal? April the Giraffe gave birth to her baby on April 15, 2017. April was a birth warrior! Not only was she able to give birth while a million people watched via live streaming video, but she successfully pushed out a one hundred something pound  giraffe out of her vagina. Amazing.

Here’s April’s story and what I learned from watching her give birth.

Tips on How to Give Birth Like an Animal 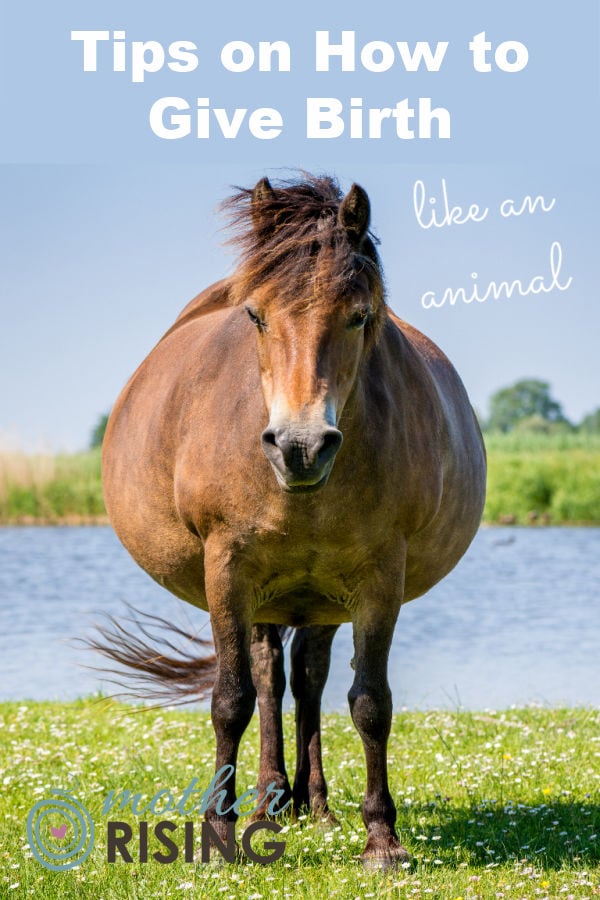 Dump the “Due Date”

According to ‘Merica and social media (both experts in giraffe birthing), April was due at least a month or two before she actually gave birth. However, according to google (also a giraffe gestation expert) the pregnancy of a giraffe can last between 13 and 15 months.

In true American form, April was given the earliest due date possible and then deemed to be “late” as she failed to give birth by her chosen date.

But did April care? No.

Did she book a medically unnecessary induction at  13 months?? No.

Did she become panicked thinking that her giraffe body forgot how to give birth and then schedule an elective cesarean because her baby was probably growing too big? No.

April kept doing her daily giraffe tasks – she kept eating, drinking and carrying on as usual. In fact, she even told herself that it could be worse. Elephants are pregnant for a minimum of 1.5 years.

At least April wasn’t an elephant.

But let’s just say that ‘Merica was correct and April was indeed in early labor a whole month or two prior to her son’s actual birthing date of April 15th.

One of the secrets to April’s success was that she instinctively knew what many human mothers didn’t – to ignore early labor.

Did April become obsessed with timing her irregular contractions? No.

Did April post on social media she was in early labor? No.

Did April adjust her life in any way because she was experiencing early labor? No.

No, April did none of those things. She ignored early labor and went about her daily giraffe life. April is awesome. Be like April.

Another thing April got right was that she gave birth in a safe and homelike birth space. Sure, she didn’t get to free-birth on the African Safari, her first choice, but she and her baby daddy compromised on the Animal Adventure Park’s birthing center.

The AAP’s birthing center valued a giraffe’s choice to give birth with little intervention, respected her birth plan and encouraged her along the way. They believed she could have a natural birth!

April did her research and chose to give birth in a place that encouraged her to do what she needed to do, but could also help in case of emergency.

One of the best perks of the AAP birth center was the abundance of clean hay! A giraffe birthing haven!

If you were one of the million people watching April give birth, you probably noticed that she wasn’t continuously bothered,  monitored, checked or fussed with. Her baby daddy and care providers were close by, offered her support when needed, but did not interfere with the process.

Because April was not bothered, she was able to focus on her task at hand – to give birth to a giant giraffe baby. Whew!

And if anybody were to start messin’, daddy giraffe a.k.a. “birth bouncer”, was ready to kick some a** to protect April’s birthing space. 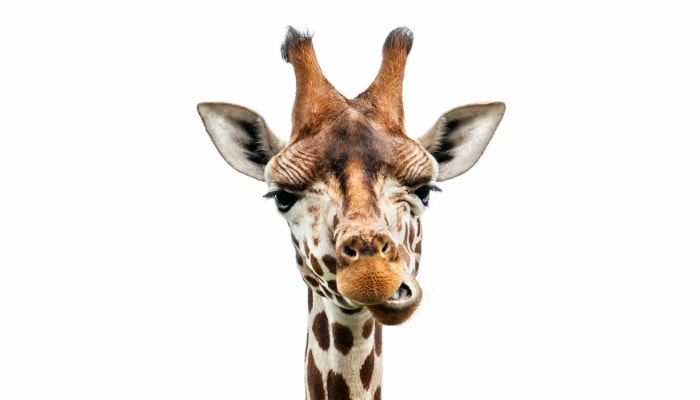 How did April know what positions to use for labor and birth?

April followed her instincts and moved to keep comfortable. Sure, she was limited to upright positions because apparently if a giraffe were to lie down she would compromise the baby, but that’s neither here nor there.

The point is that she wasn’t told to be in a particular position to accommodate someone else, but had freedom of movement which kept her comfortable but also encouraged labor progress.

Did you know that April’s most recent birth wasn’t her first? In fact, it was her fourth birth. Of course, ‘Merica sure didn’t understand why a fourth time mother took sooooo long to give birth, right?

But she didn’t care what other people thought and took her sweet time, walking around and around her stall, er…. birthing suite. April didn’t try to hurry things up to make life easier for anybody else, but did what needed to be done moment by moment.

April didn’t use Pitocin to speed up a normally progressing, undisturbed giraffe labor. She didn’t push longer or stronger than was needed. And nobody at her birthing center rushed her either. (Did you notice that nobody yelled at her to PUSH! when her baby’s head came out?)

Nope, April followed her body’s instincts and did what needed to be done. April birthed on her own time frame.

We’re going to ignore the fact that April was given tasty treats at strategically stationed areas in her birthing suite to ensure excellent video footage, and focus on the fact that she was encouraged to eat and drink freely throughout labor.

Eating and drinking throughout labor is helpful for all mammals, and believe it or not, even humans!

Fasting during labor may cause ineffective contractions, a longer labor and fetal distress. But April didn’t worry about things like that. When she was hungry she ate. When she was thirsty she drank.

Give birth like an animal – eat and drink freely during labor! (If you’re looking for some good ideas, here are some ideas for snacks during labor and a tasty way to drink electrolytes throughout the birthing process.)

You know at what point during April’s live feed that I got excited? When she pooped!

Human birthers are typically horrified at the thought of “pooping on the table”, but as a childbirth educator, when a mother poops I know she’s making excellent pushing progress.

When a baby moves through the pelvis, if there’s poop in the rectum… it’s coming out. Poop is a thing to be celebrated (discreetly, of course)!

To prove myself, here’s the transcript of my commentary during the final moments of April’s birth.

Did April care that she simultaneously pushed out her baby and poop? No. She didn’t give a sh*t. In fact, she gave quite a few. 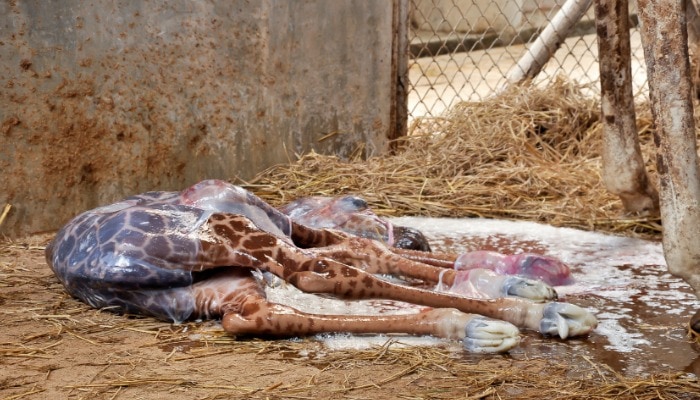 Finally, in birthing lessons by April, even before she finished the process of giving birth, April’s attention lasered in on her baby. Little baby giraffe was intentionally left alone and undisturbed with his mama for bonding, imprinting, and standing on his own four feet. And eventually nursing!

At this point April and other birth attendants clearly grasped the theme – April’s got this. Sure, April and baby giraffe were likely a bit stunned (baby giraffes fall six feet from the mother to the ground at birth!), but they were left to muddle through this new beginning together as a unit.

There were no measurements taken, baths given or medications administered. The priority was for mother to be with baby. 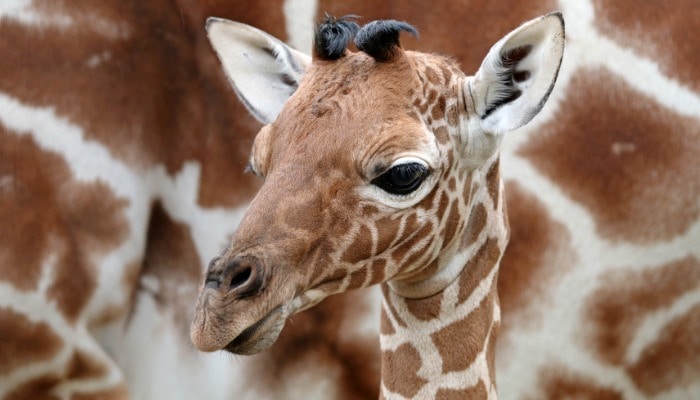 Of course, if you DON’T want to give birth like a giraffe, don’t. You do you. However, nature has a design and it works quite well for other mammals – giraffes like April and humans like you.

Even if you can’t follow all 9 of April’s birthing tips, see if there’s 1 or 2 that would work for you and your birth. You got this, mama!

Just to recap, here’s what I learned from watching April give birth.

Leave me a comment and let me know what you thought about April’s pregnancy and birth! 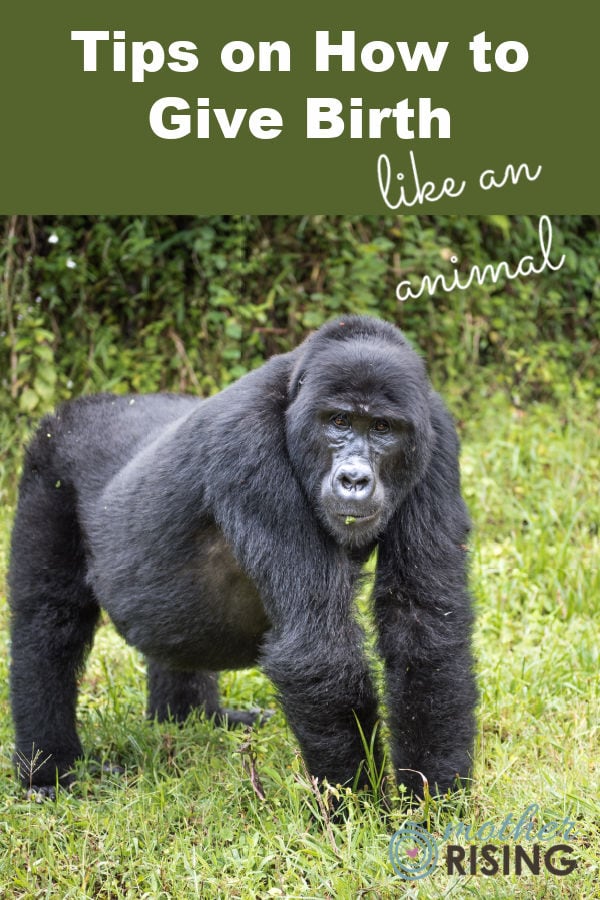 How to Get Through Painful Labor Before an Epidural | Mother Rising

[…] For some birth may need to look a bit more instinctual like April the Giraffe’s birth in April of 2017. […]

I love this post! What a great comparison / reminder of natural birthing.

Wow this is amazing and this is exactly what I needed to hear. Thanks mother rising, thanks April and thanks April's baby Looking forward to give birth like April!!!!